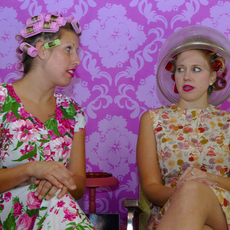 This series is a tribute to my grandmothers and the women around them when they were young. Both grandmothers kept their special mementos of their girlhoods in boxes. I stumbled upon both boxes at separate times when going through their things. Inside each, I found a small autograph book with inscriptions and messages from their 'school chums.' Also in these boxes were small photos of their friends. The identities of these girls were unknown to me as both grandmothers are not longer with me to tell their stories.

I wondered what dreams these young girls had for their future back at that time. I am sure most became wives and mothers, but what if they wanted to be more? Young girls were raised to proper young ladies, often told they would best serve the world by marrying a respectable man and raising a family. Perhaps these young girls desired more, as many young women of today often do. Maybe they wanted to change the world, discover the world or simply find their own way in the world. They aren't here to ask, so I looked at each photo carefully and created a story for each.

This work is meant to show what could have been offered to these girls as a path for their future. The snapshot photos are juxtaposed with different images to represent the hopes and dreams of young women and also to remind us today that nothing is impossible.