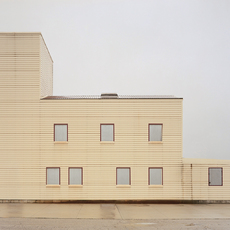 Facade is a photographic project that concentrates on vernacular architecture and spaces, i.e. schools, housing, industrial, retail buildings. Photographs of urban and suburban architecture operate with a sense of familiarity, illustrating seemingly banal moments, however, upon further inspection, certain oddities begin to rise to the surface. I want the peculiarities to exist as metaphors for uneasiness, rejection, and isolation. I illustrate these feelings as odd photographic moments within a landscape of form, structure, and order. This is accomplished by using the innate qualities of the photographic process, coupled with varying amounts of digital manipulation. Specifically, each image is cleansed of distracting elements. I control these elements by only photographing in overcast skies or including small signs of reality, such as a piece of trash, dead leaves, cement cracks, or rust stains. This eliminates the direct relationship to the actual location or time, while still allowing an aspect of reality to remain. The aesthetic decisions applied to each image provides the viewer with a mixture of reality and fiction. I want the audience to challenge the authority that I, as the artist, put into the space, the authority of photography as evidence, and the authority that constructed the actual edifice.