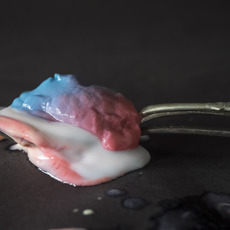 My portfolio meanders through varying series, but one thing has always led to another.

I tend to work on several projects at once. I’ve examined the tenuous, ebbing boundaries between reality and perception. I’ve asked questions about human relationships, the nature of home, my relationship to nature, and the significance of the quotidian. The ordinary act of living is endlessly complex and uncertain. It is through the ordinary that, for me, the world resonates.

Sometimes things are just as they seem and sometimes they resonate larger. One day, that simple bowl of yogurt suggests a stroke of paint and the whole history of art is revealed.
The resulting series, “Small & Large Thoughts”, literally began with a casual glance, a random thought, an observation after lunch. My emptied bowl of yogurt looked like the remnants of a painter’s palette. Having originally trained in painting and drawing, I began to reflect on that artform’s centuries of practice. I began shooting in black and white then realized that if I wanted to truly address photography’s relationship to paint that I needed to investigate color. I have also, often, increased the scale, further referencing other media. The casual glance occurs again. In shooting, I looked over and noticed old spoonfuls of yogurt, now given over to decay, empty containers demanding to be stacked, sculptural presences.