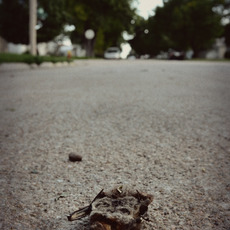 Diary of a Mad World

My desire to mix word and image has led me to create my Diary of a Mad World portfolio. Here, I create images that appear to be grainy modernist styled black and white photographs. However, what the viewer sees as “grain” from a distance, become words as the viewer is drawn in closer to the image. The viewer is left to reconcile the connotation of the image and denotation of the words.

The relationship between images and words can be traced back all the way to fourth century B.C. Greece to the Poet Simmias of Rhoades, who wrote his writings in the forms of images, much like the Futurist poets of the early 20th Century. The relationship between images and words in the visual arts is often tumultuous, and sometimes harmonious, but is undoubtedly a very rich part of the contemporary art dialogue.

I use dynamic asymmetrical compositions to capture the viewer’s attention, and I use large-scale images for the space they allow for me to add minute details in the form of text. What the viewer sees as “grain” from a distance, become words as the viewer is drawn in closer to the image through the variety of styles in how the “grain” is arranged to create texture. The texture is sometimes more organic and chaotic, and other times will be more formally structured to create pattern. Sometimes the words are more visually obscure and other times they are more visually overt. The words themselves are original poems, stories, and critical writings on art and photography I have written. In the end, the text may challenge, distort, or complement the context the photograph creates, but whatever they do, the text adds an abstract quality both visually and conceptually.