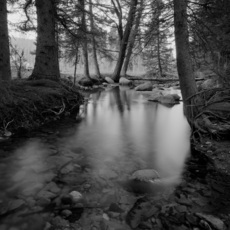 At 117 miles long the Henry's Fork is one of two main arteries of the Main Stem of the Snake River. It begins on the southern edge of the Yellowstone Ecosystem at two main sources - Henry's Lake and Big Springs. The Henry's Fork dissects the Island Park Caldera and passes through some of the most beautiful, rugged, and iconic scenery in the Inter-mountain West. Place names like Box Canyon, Railroad Ranch, Cardiac Canyon, Mesa Falls, and Bear Gulch define the landscape of the upper Henry's Fork. The Henry's Fork Watershed also contains several smaller waterways. Some of these include Targhee Creek, The Buffalo River, Fall River, and Moose Creek. These lesser waters are some of the most beautiful, remote, and pristine to be found in the area. They are full of rapids, waterfalls, quiet little runs, and wild fish.After tumbling down the Island Park Caldera the Henry's Fork takes on a gentler feel as it passes through the agricultural communities of the upper Snake River Valley. The slow moving lower river flows over several low-head dams where much of its water is diverted into irrigation canals used to water the surrounding farmland. As it nears its junction with the South Fork of the Snake the Henry's Fork passes through thick stands of Cottonwoods and Willows. At this point it hardly carries a current and barely, if at all, resembles its' upper stretches. After joining the South Fork, the Henry's Fork loses its' identity and becomes The Snake River. The Henry's Fork is a complex watershed, which supports a complex set of uses. It's a world-class trout fishery and fishing destination. It provides cover and nesting habitat for a variety of wildlife including big game and migratory and resident birds. It provides recreational opportunities such as hunting, hiking, camping, wildlife watching, boating, and, as previously mentioned, fishing. Its dams generate electricity and divert irrigation water. For those who care to look - it's a source of beauty and inspiration. it's a complex river system that offers a variety of opportunities for a variety of users. These photographs document my encounters with the geography of my homeland, which lies within the watershed of the Henry's Fork of the Snake River.