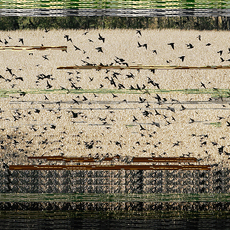 Entropy: A natural condition of the physical universe wherein all things continuously move toward greater disorder.nnPhotographic images form many Western ideas about the natural world. Beyond brief time spent in managed environments, most people view nature in magazines and on television, in calendars and postcards, and as advertisements and décor. But photographs offer only decontextualized fragments of information, manipulated and filtered by the photographer the medium itself. My series Entropy reveals this disparity between phenomenal and photographic experience, in particular as it relates to the land. After a catastrophic file system crash, I ran a recovery program which (mis)interpreted my own digital landscape images. The resulting files unearthed the landscapes" digital building blocks, and created serendipitous interactions that allude to more substantive meanings. While parts of the images are immediately recognizable, being confronted with the photographic media interrupts any attempt at superficial reading. In viewing them we are encouraged to reflect upon photography's role in cultivating commonly accepted ideas about nature, and to be conscious of how those ideas influence our valuations and actions toward it.