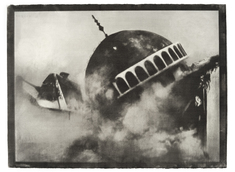 Asymmetric Warfare presents the work of Justyna Badach, who examines how modern-day military propaganda shapes our perceptions of war and conflict. Using her computer as a camera, Badach captures screenshots from ISIS recruitment films and the devastation resulting from the "War on Terror" waged by American and Russian military forces. She then creates large-scale prints made of gunpowder -- literally weaponizing her photographs. In doing so, she presents an unsettling view of how both ISIS and the military increasingly generate "media that feeds on viewers' addiction to social media, exploits the voyeuristic lure of reality TV, and nourishes their audience's desire to watch what is socially taboo."

Join us on February 21 at 6 p.m. for a panel discussion with the artist and two experts in Middle East studies and journalism from the University of Denver, followed by the opening reception. All events are free and open to the public.