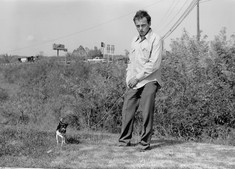 FotoFilmic announces its first "FotoFilmic Village" May 30 - June 3, 2016! FotoFilmic Village is a new workshop retreat series designed to boost the creative practice of growing photographers in an intimate format bringing together some of today’s most acclaimed artists and figures of the contemporary photography industry on Bowen Island’s idyllic natural setting 3 miles off the Vancouver coast!

FotoFilmic Village will give the opportunity to 12 photographers only to meet and closely work with renowned guest artists MARK STEINMETZ, SHANE LAVALETTE & PAUL SCHIEK over 4 days:
- Mark Steinmetz: "The Lyrical Documentary"
- Shane Lavalette: "The Art of the Application"
- Paul Schiek: "Image, Context & Sequence, Making a photobook"

Organized in small groups to optimize individual levels of interaction, the combination of these 3 workshops will provide a strong advancement platform for all photographers committed to the medium.